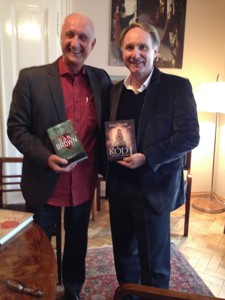 January 21st, 2014, Prague The success of Jozef Banáš´s novel Code 1 – The Secret of the Miracle, which arises extraordinary interest among Slovak readers since its publication in September, has awakened the curiosity of Dan Brown as well. The world famous American writer and author of the bestselling Da Vinci Code visited Prague this week to introduce his newest novel Inferno. In the Czech metropolis, he also met with Jozef Banáš. “A very short, formal and symbolic meeting was planned as he learned about the fact that our literary critics call me the Slovak Dan […]